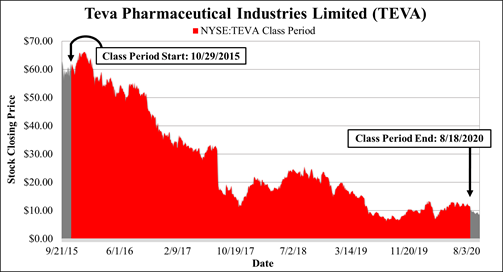 Faruqi & Faruqi, LLP, a leading minority and certified woman-owned national securities law firm, is investigating claims against Teva Pharmaceutical Industries Limited (“Teva” or the “Company”) (NYSE:TEVA) and reminds investors of the November 23, 2020 deadline to seek the role of lead plaintiff in a federal securities class action that has been filed against the Company.

As detailed below, the lawsuit focuses on whether the Company and its executives violated federal securities laws by making false and/or misleading statements and/or failing to disclose that: (1) Teva had made substantial illegal kickback payments to charitable foundations to cover Medicare co-payment obligations of patients taking Copaxone; (2) accordingly, Teva’s revenues derived from Copaxone were in part the product of unlawful conduct and thus unsustainable; (3) the foregoing misconduct subjected Teva to a foreseeable risk of heightened regulatory scrutiny and enforcement, as well as reputational harm, when the truth became known; and (4) as a result, the Company’s public statements were materially false and misleading at all relevant times.

Specifically, on August 18, 2020, the United States Department of Justice (“DOJ”) issued a press release announcing that it had filed a complaint against Teva under the False Claims Act. Specifically, “[t]he government alleges that, from 2007 through 2015, Teva paid The Assistance Fund (TAF) and Chronic Disease Fund (CDF) with the intent and understanding that the foundations would use Teva’s money to cover the Medicare co-pays of patients taking Copaxone. During the same period, Teva raised the price of Copaxone from approximately $17,000 per year to over $73,000 per year.”