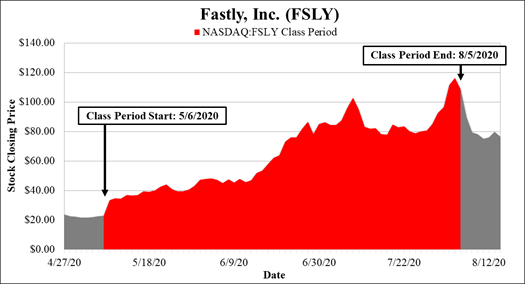 Faruqi & Faruqi, LLP, a leading minority and certified woman-owned national securities law firm, is investigating claims against Fastly, Inc. (“Fastly” or the “Company”) (NYSE:FSLY) and reminds investors of the October 26, 2020 deadline to seek the role of lead plaintiff in a federal securities class action that has been filed against the Company.

As detailed below, the lawsuit focuses on whether the Company and its executives violated federal securities laws by making false and/or misleading statements and/or failing to disclose: (1) that Fastly’s largest customer was ByteDance, operator of TikTok, which was known to have serious security risks and was under intense scrutiny by U.S. officials; (2) that there was a material risk that Fastly’s business would be adversely impacted should any adverse actions be taken against ByteDance or TikTok by the U.S. government; and (3) that, as a result, Defendants’ positive statements about the Company’s business, operations, and prospects were materially misleading and/or lacked a reasonable basis.

Specifically, on August 5, 2020, after market close, the Company hosted an earnings call for its Q2 2020 results. On the call, Company CEO Joshua Bixby revealed for the first time that “ByteDance, the operator of TikTok[,] was our largest customer in the quarter.” Bixby also suggested on the call that ByteDance was a significant customer in Q1 as well, stating that “over the last six months, [TikTok] represents just about 12% of revenue, trailing 6 months ending June 30.”